The making of a printable image

My friend George is new to Photoshop. He has a great eye and judging by the pictures he takes, he must have a really good camera! I sent him an image a couple of days ago and he asked me how I did it. So when I wrote my reply, I thought it might be instructive to write it up for others, and document it a bit with screen captures.

If you're expecting a really hotshot tutorial, you're going to be disappointed. I didn't do anything really fancy. Just what I consider a reasonable workflow in Photoshop. I'll try to explain why I did what I did as I go along, but sometimes I don't really know why! So here goes nothing!

To start with, here's the FINAL picture. You can click on it to see it full-screen.

Step 1: the capture
This motorcycle was parked in front of the Red Umbrella Inn across the road. I had a DSLR course student and we wandered over to do some shots and I said, in a teaching moment, "take 15 pictures of that bike and make them all different". While she was doing that, I did too, except I already had in mind what I wanted to get. Here's the bike in the original image, untouched:

You may or may not be able to see the wall and the bushes behind the bike. It certainly wasn't completely black. Here, I'll artificially crank up the levels so you can see it:

Step 2: Photoshop
Unusual for me, I didn't touch the image in Lightroom after I imported it, except to set the "Pick" flag. I took it immediately into Photoshop CS6.

I duplicated the layer and used curves to deepen the contrast. I also used the healing brush, content-aware-fill and the clone stamp to get rid of virtually everything below the gas tank and headlights.  Then I duplicated the layer again and set the blend mode to "multiply". That darkened the blacks and made the yellow more rich.


Next step was to make it more crisp, so I ran a high pass layer. You do that by duplicating the layer and setting the blend mode to "overlay". Then choose "High Pass" from the filter list (it's under "other"). A comfortable level for me is 4 pixels, to keep the image from going over the top but YMMV.

I "stamped" a new combined layer and ran content-aware-fill on a couple of highlights that I thought were distracting. But the windshield was gone, and I really needed that to balance the image. I used levels to bring it back but I masked everything else out so as not to affect it.


So I decided to bite the bullet and paint it in. Using the pen tool and a Boolean curve, I traced the edge and then using a small pencil brush, stroked the path I had created. It was too strong, so I faded it back, then I used a non-destructive dodge and burn layer to soften it. You do that by creating a blank layer, fill it with 50% grey and change the blend mode to "overlay". Now everything you darken is burning and lighten is dodging, so I used soft brushes at low opacity to do that smoothly, and even a gradient to make it fade away at the top. 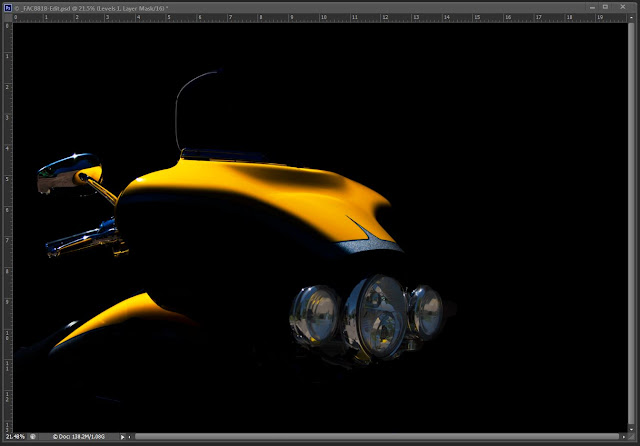 One final step. I stamped one more layer, then I ran the new plug-in, Topaz Clarity. (you can get it here. On sale for $29.99 until May 31/13: use the promocode "claritynew"). This allowed me to fine tune certain areas and details.

Almost done. Now to prepare it for print, I did two more things. Jim sent me an action to use to prepare images for printing on his Epson 7900. It resizes the picture (my go-to size is 13x19, on a 24x18 size sheet) and puts a border around it. It also lets me insert a name for the image. And I add the signature on a new layer so that I can change its color, size and opacity without affecting the image. The final product is at the top of this post.

The last thing you need to do before printing is to soft-proof the image for the printer/paper combination you're using. That's not for this little tutorial.

A word about the signature. My handwriting is, well, "awful" is putting it mildly. I can't write my name legibly. So hand-signing images is a challenge. I've opted to digitally sign, but on art images, unless you're already famous, the signature has to be legible. It took me probably 500 tries to write "Springer" in a way that it was legible and looked OK. I struggled with my first name, and was never able to achieve it. In frustration, Rosa picked up my stylus and wrote the "G" for me! (actually no she didn't! I remember now that she did it with her finger on my iPad!).

I created a brush in Photoshop to "stamp" my signature. Here's what you do, it's really simple. Scan in or create your signature and open it in Photoshop in black ink on a white background. Make it large enough so that it will be high quality at size: I used about 1000 pixels wide. Now from the edit menu, select "Define Brush Preset". 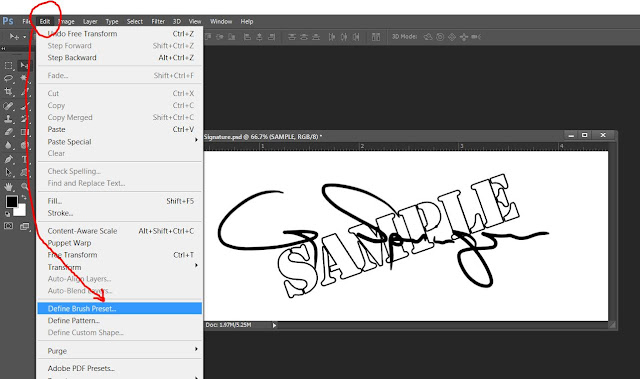 Give it a name and you're done! Your new signature brush is in the list of brushes. Just select it and click wherever you want it to appear. Use a new layer and you can modify its appearance as you wish. Don't forget to save your brush set just in case you have to reload Photoshop or you want to take the brush set to another computer. You do that here: 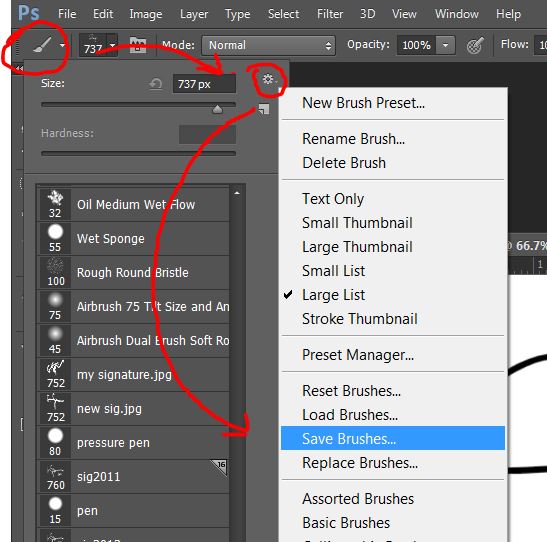 Summary
I may not be done with this image. As I look at it, I wonder how much better it might be with the headlights ON. When I have some time, I might revisit it with a digital paintbrush in my hand!

Note: as I re-read this, I notice that some of the things I did are not that simple. They are for me because I do them all the time, like "stamping" a new layer, using the pen tool, or creating a non-destructive dodge/burn layer. You can Google all this stuff, or hit help in Photoshop for more information. Work with it a few times and you'll learn how.


I hope you enjoyed this simple example. Please join the Newsletter Update list so I can give you a heads-up about new posts when I make them, and give you some free stuff.