A while ago, a British photographer by the name of Antony Northcutt posted some images of black-and-white flowers on a black background. They were outstanding and I wanted to learn how to do that. Fortunately he had written an eBook documenting his technique, which I bought and studied.

Pablo Picasso said that a “good artist copies; a great artist steals”. Don’t take it literally — the great artist uses the work of others as an inspiration, builds on it and makes it his own. I loved Northcutt’s work but not only did I change his technique but also the result as well. It inspired me to create something my own and I hope this does the same for you.

What I love about Photoshop is that there are a million ways to do anything. That means that everyone’s approach is going to be different! In this short tutorial, I’ll show you my workflow and some of the thinking behind it, to give you some ideas.

This deals with making black and white images of flowers (or other subjects!) on black backgrounds. The key points are subject choice, selection, background rendering, and toning including non-destructive dodging and burning. I edit in Photoshop CC 2014 but most of this works in earlier versions as well.

Please click on any image to view it full-screen.

Here’s my weak suit. I don’t have that great an eye. I’m looking for repetitive patterns and not-too-fine details. Flowers are easier because they’re created that way! But they don’t all work, and flora with fine textured edges elude me. Because we’re doing black and white and removing the background, you can choose subjects without too much regard for background. I’m looking for something big enough to fill most of the frame because I don’t want to have to crop too much. And with soft lighting because I want to save those deep blacks for the background.

When I take the picture, I expose for the subject because the background is going to be removed anyway. I want the broadest possible tonal range so of course I shoot in RAW. Sometimes I’ll bracket exposures because colours can fool you and occasionally I might blend exposures in an HDR program as well. The key is to watch your histogram and make sure you don’t blow out the highlights.

This works well on Portraits too! 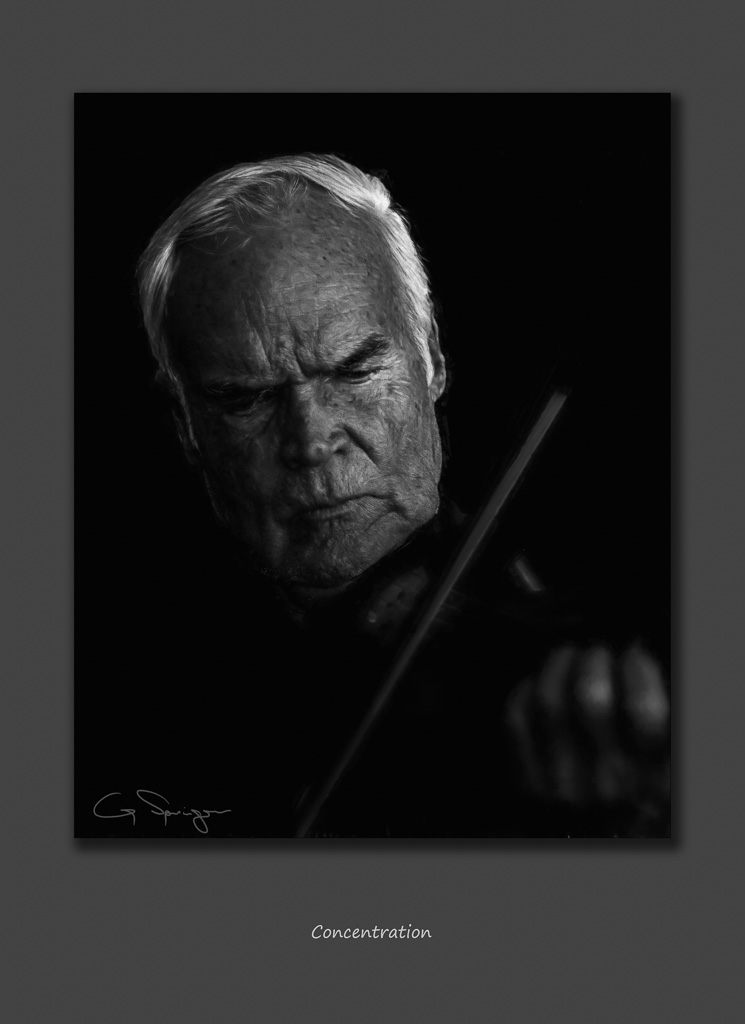 I’m a Lightroom fan. But the toolbox in Lightroom and Adobe Camera Raw are identical so use whichever one you’re most comfortable with. I find it easy to surf through the images, switching from colour to black and white and back again, to help visualize what will work best. Sometimes I’ll crop at this stage, because I know what I’m shooting for anyway. I personally like square images for this approach. At first, my goal is to tone the image so that I have details at both ends – dark and light. Again, ignore the background and just look at the subject! I will be toning in more detail later, so this is just a “rough cut”. Now you’re ready to export to Photoshop.

Once there, my very first step is ALWAYS to hit Ctrl-J, Cmd-J on a Mac, to duplicate the background layer. I want to leave the original layer intact in case I want to go back, and I don’t want to rule out reducing opacity or changing blend modes on the working layer(s). Turn off visibility of the background layer. The next step can be the tough one.

Again there are a number of ways to skin this cat. For me, one of the simplest is the Quick Selection Tool, followed by Refine Edge. My goal here is to get all of the flower, I can finesse the edges later. Another easy tool to use is Topaz Remask. Make sure you get it all. If you select too much you can erase it later, but it’s much harder to add something you missed. Using Refine Edge, you can now clean up the edges of your selection. This isn’t a workshop on how to do that: suffice it to say, the simpler the flower, the easier it is. A lacy subject with complicated edges can be very challenging! 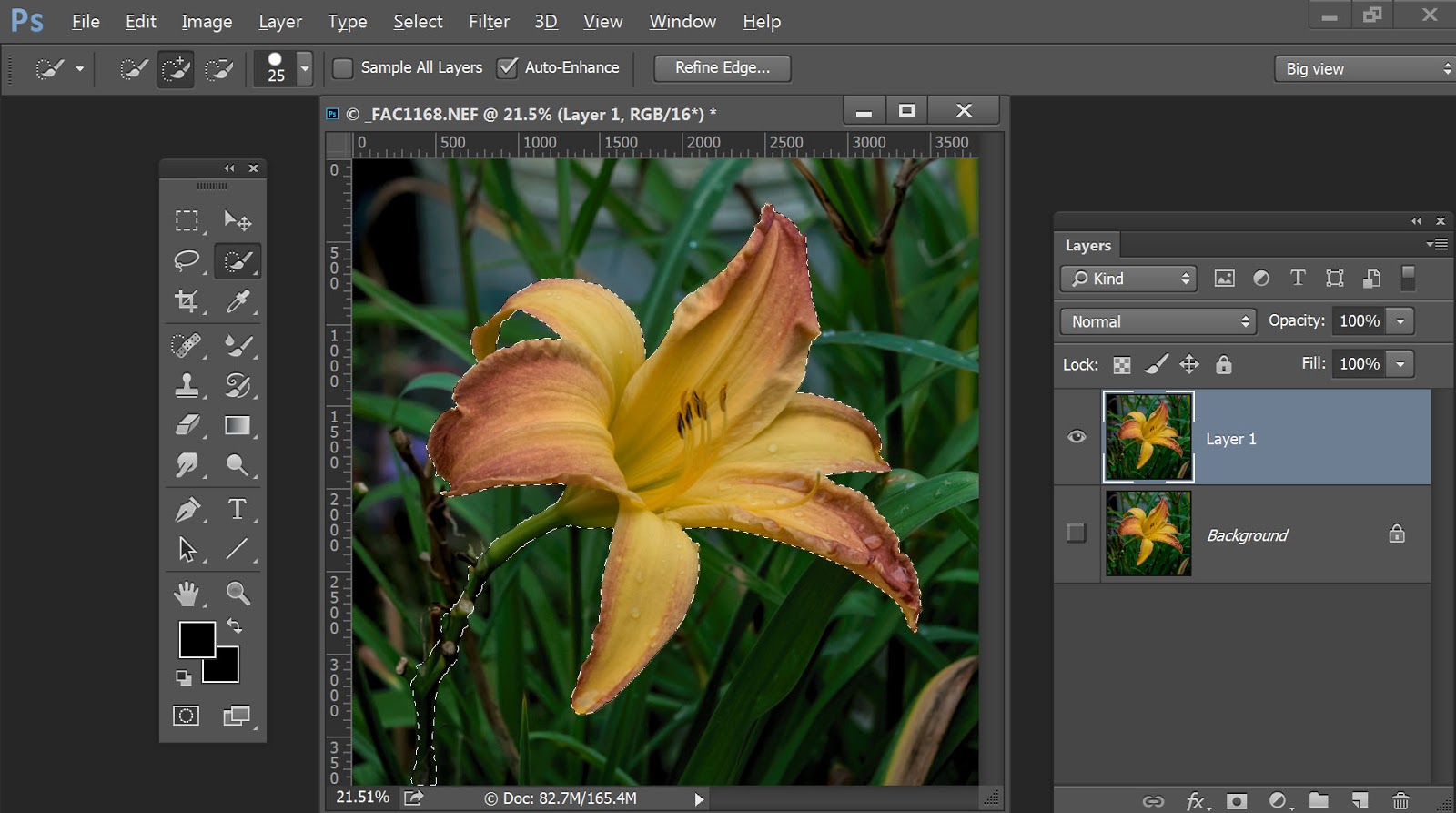 Now once it’s selected, ctrl-J (cmd-J) works a little differently: it copies your selection only onto a fresh layer.

I’ve seen this done a number of ways, but I’m in favour of the KISS principle. Northcutt had you select the layer underneath, create an exposure adjustment layer, slide the exposure down as far as it will go, and you have an almost-black background. There’s one advantage to that method: if you want to keep some vestiges of what was around the subject in the final image. But the problem is, you won’t get a pure black. That makes a huge difference when you go to print. But every artist and every image is different! 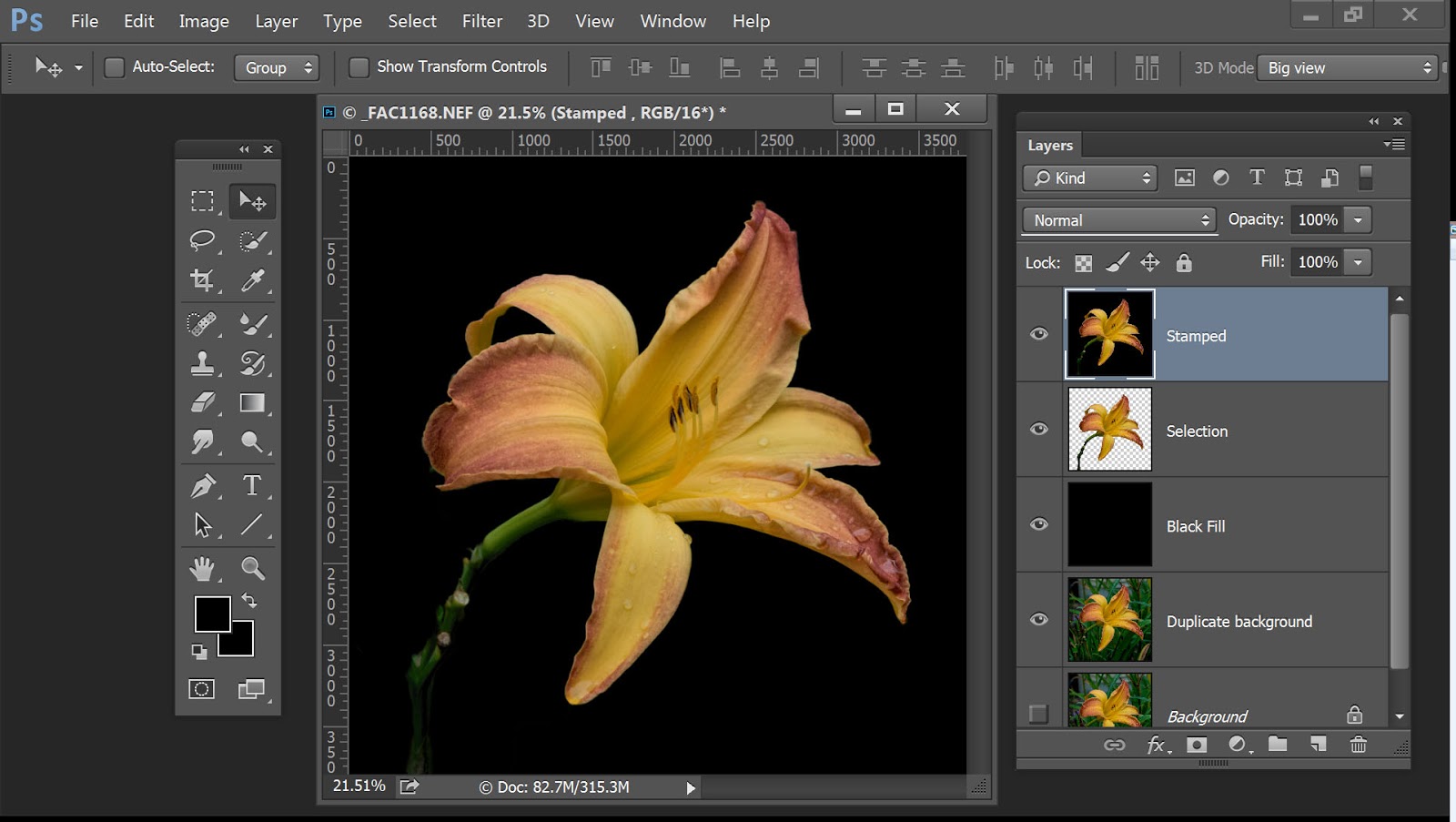 Now it’s time for a little cleanup. You can go into your selection layer and use the eraser tool, but if you make a mistake, it’s hard to go back. Instead, add a mask on the layer and paint on the mask. Anything painted in black will reveal the layer underneath, anything painted in white will hide it – and it’s easy to go back and forth (the “X” key switches the foreground and background colours). Depending on how fussy you are, this can take a few moments, or hours!


Sidebar: "Do as I say, not as I do"! Mea Culpa: when I did this image, it was more about creating this tutorial than a final image so I took some shortcuts. Trust me, it's much better to use a mask because you can fine tune right down to the pixel level. And I would not consider doing this kind of editing without my Wacom tablet and stylus. If you're reading this and you don't have one, it's time to go shopping (Amazon Canada or Amazon US).


The Black and White Conversion

You could leave your image in colour. You’re the artist! But I like black and white for this, and, well, I’m the artist today! Again, there are lots of ways to approach this. Before we do…

At this point I give up my totally non-destructive approach. I keep everything I’ve done up to now separate so I could go back if I want to, but I personally find it easier to work on a combined layer at this point. So I “Stamp” a fresh combined layer on top of the others, without deleting them. You do that with “Ctrl-Alt-Shift-E” (Cmd-Option-Shift-E). That takes a lot of fingers and I do it often, so I’ve programmed that into my Wacom tablet on a single hotkey. You can make a keyboard shortcut for it too.


Sidebar: You’ve done a bunch of work. Save often as you go along. Save it once early, then just hit ctrl-S (Cmd-S) when you think of it and you’re saving it again. Save it as a .PSD file to preserve all your layers. 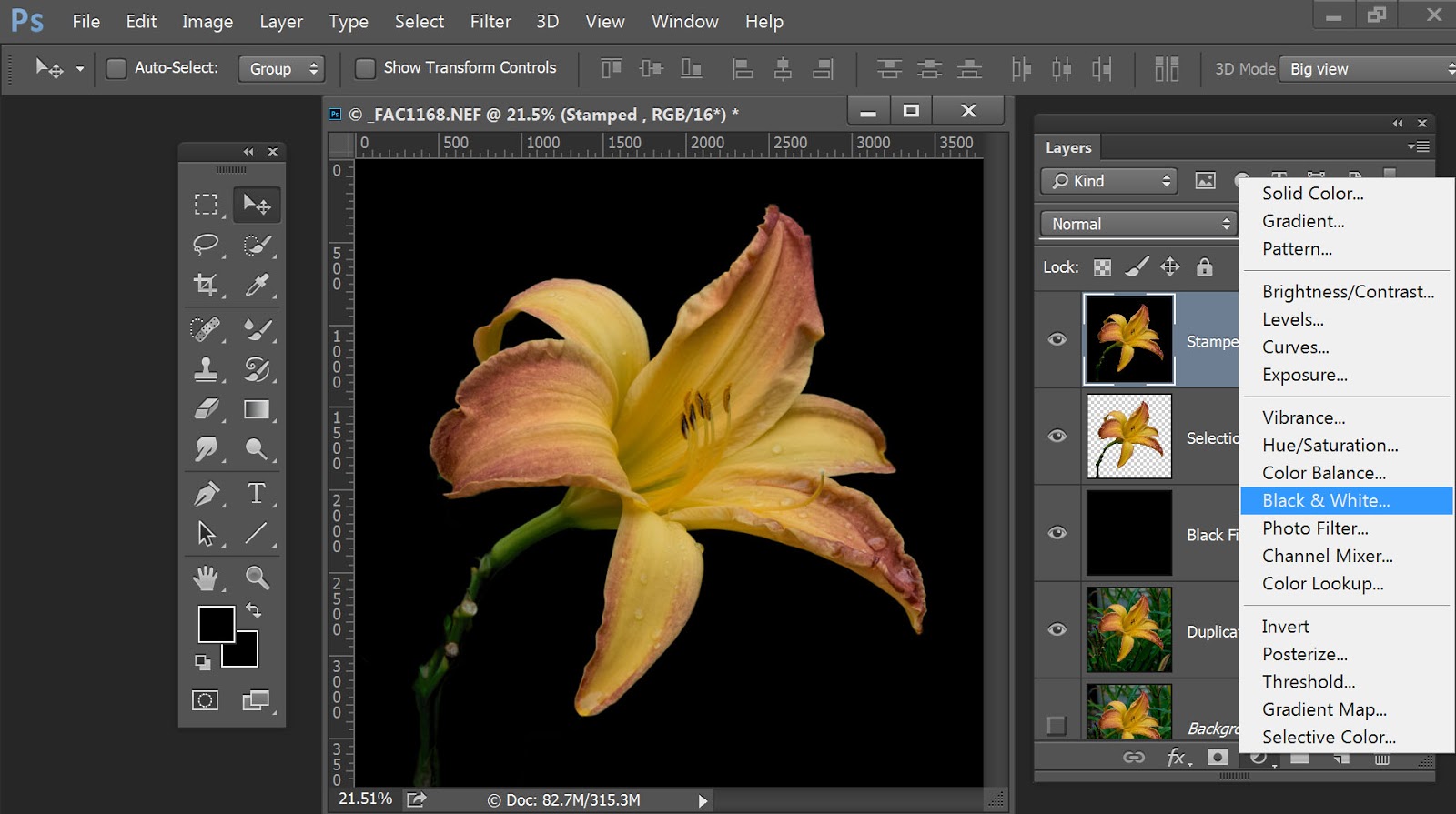 OK now for the black and white. You could just go up in the menu and change the whole thing to greyscale. Boooh. No control! In the layers pallet, create a black-and-white adjustment layer. Now you have a bunch of sliders that let you choose what happens to each colour in the original. Play. This is where the artist in you starts to come out. 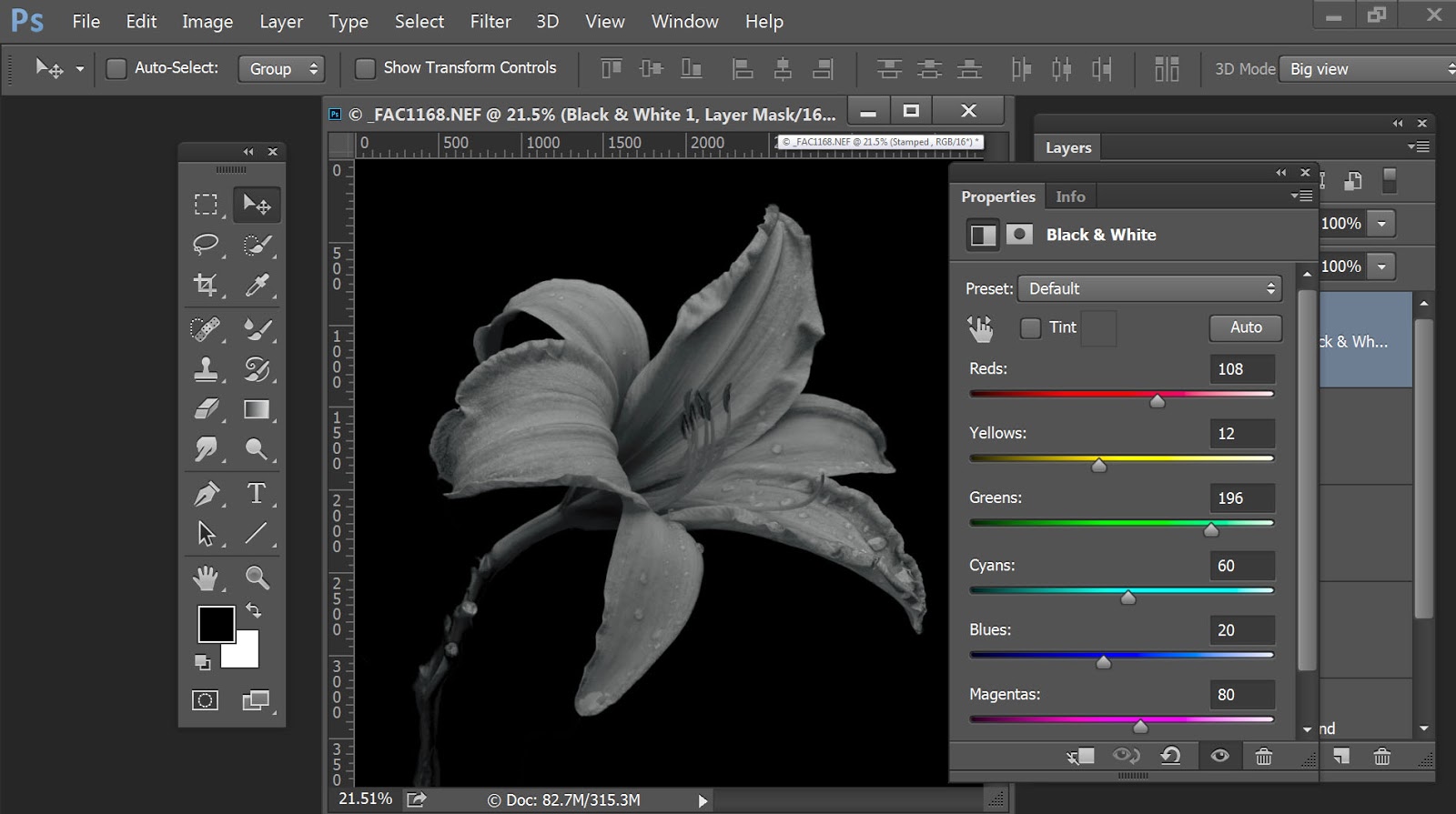 Sometimes I’ll use an outside plugin program called Google (Nik) Silver Efex Pro 2 for the conversion. It does much the same thing except you get much more control. Topaz also makes a similar program called “BW Effects”. These are great for adding multiple levels of control.


Sidebar: There are other plugins and techniques that you might want to consider using. Topaz Clarity. Adding detail and sharpening with a hi-pass layer. InFocus. DFine. Viveza. It’s your call… (Here's the link to Topaz Labs)

I have two more steps in my workflow to make the image jump out at you. One of them is toning the image using Curves, the other one is to dodge and burn certain areas. 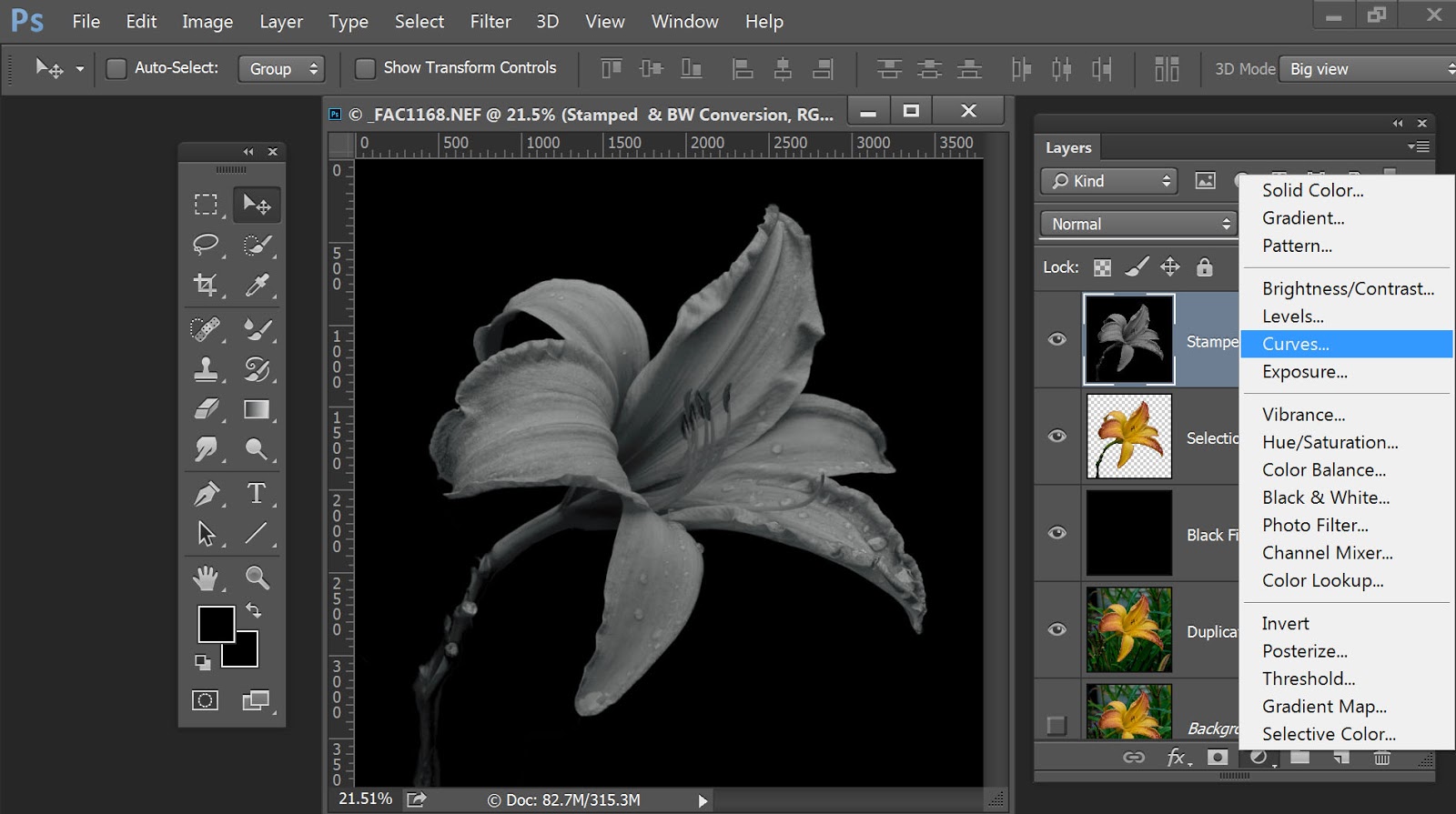 I’ll next add a curves adjustment layer which adjusts the overall toning of the image. Make the curve “S”-shaped if you want more contrast. Pull specific spots to re-tone specific densities. Now I'm going to “Stamp” another fresh layer because I want to do a non-destructive dodge and burn. 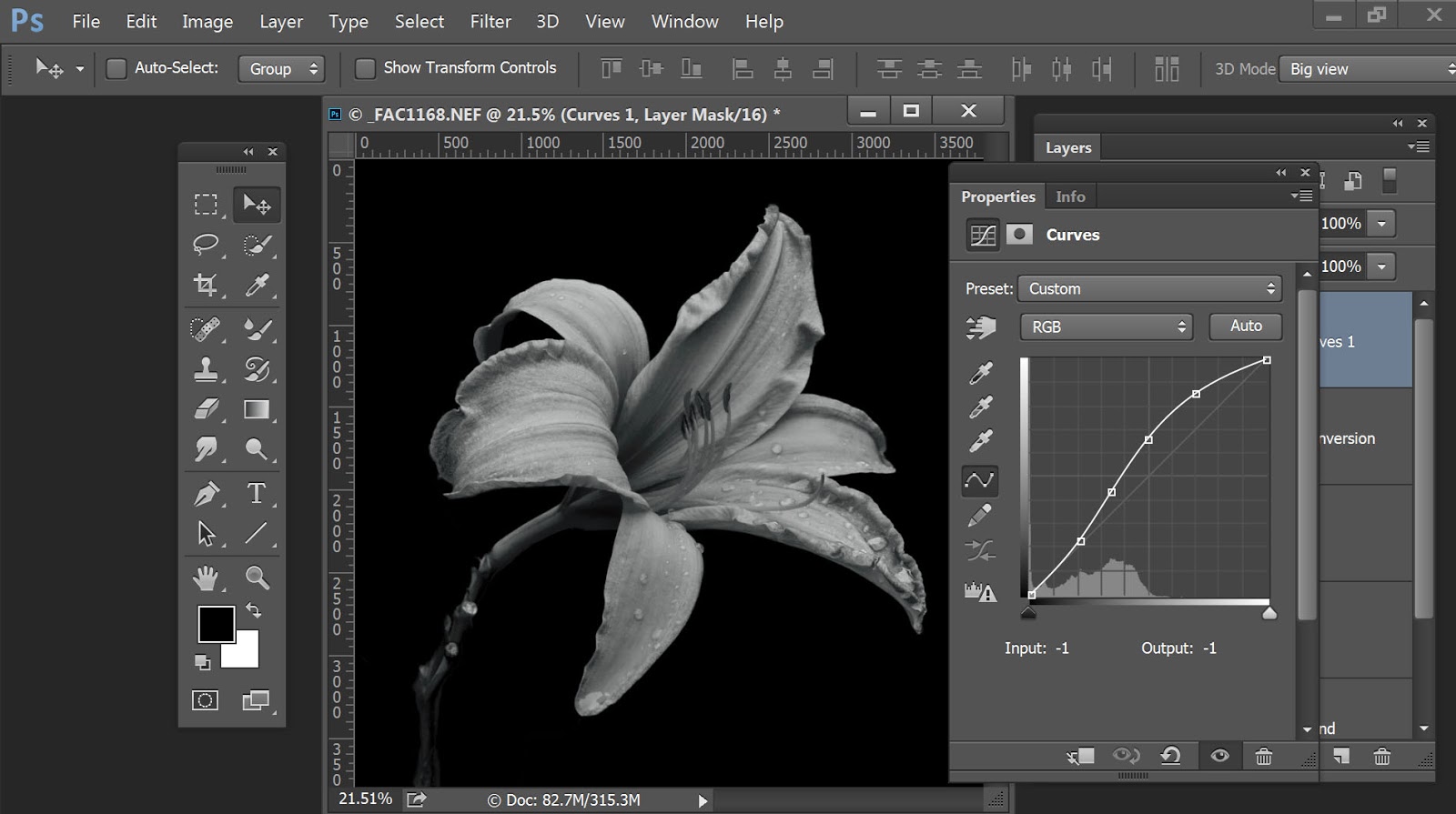 The dodge and burn trick: create a new layer and fill it with 50% gray. Change the blend mode to “overlay”. In this mode, 50% grey has absolutely zero effect on your image. But if you paint in black on this layer, it darkens, or “burns in” what’s underneath it. If you paint white, it lightens it, or dodges what’s underneath. I usually choose a soft brush, turn the opacity down (sometimes really, really low, like 10%!) and I paint. If you paint over the same spot, it gets darker (or lighter). The “X” key switches back and forth. Make a mistake? Switch colours. Or just fill the whole layer with grey again and start over! 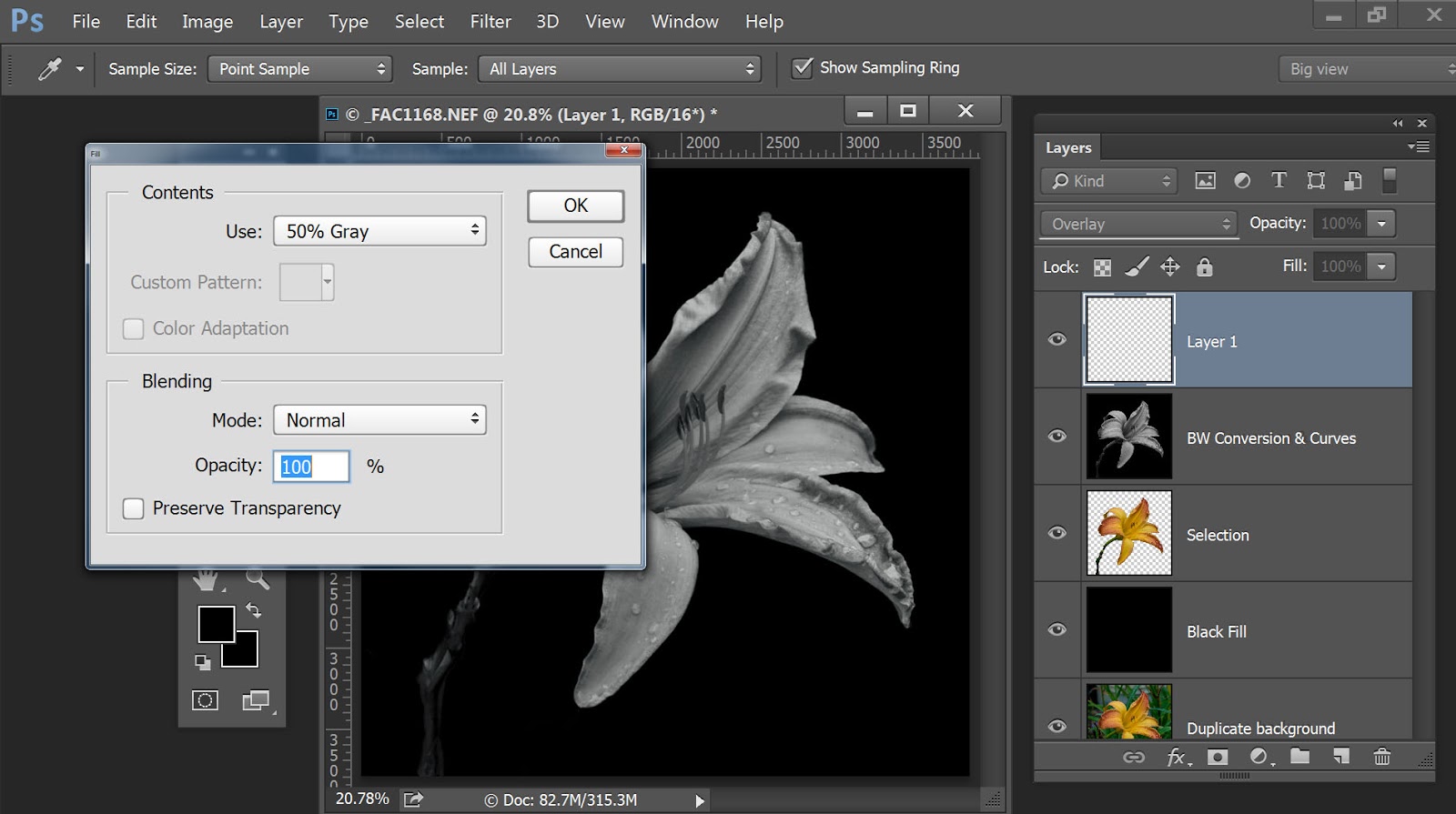 As a rule of thumb, I burn in the dark things and textures to make them stronger, and dodge the light things to make them soft. In this case, I also used some local sharpening to bring out the water droplets. 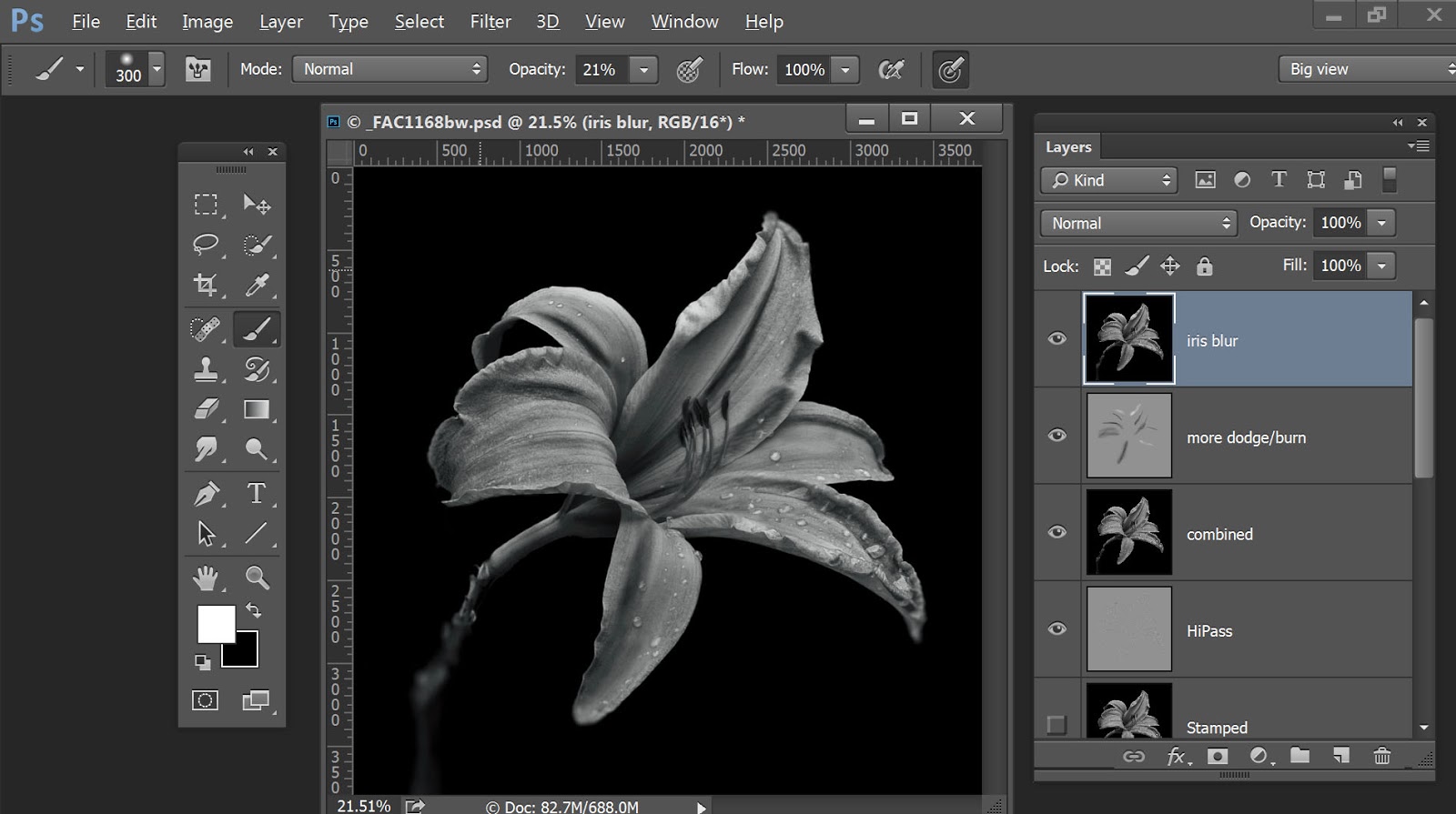 I added a hi-pass sharpening layer (much the same technique as the Dodge/Burn layer. "Overlay" blend mode, the Hi-pass filter is under "others" in Photoshop, I typically use a value of 4 px). I did a little more dodging and burning. In the sample image, I had included a stem, which I wanted out of focus. I used an iris blur, but it caught the edges of the flower so I added a mask and painted out the areas I didn’t want blurred. Then I decided I did want something other than pure black in the background, so I made a new layer, opened it in Topaz Impression, masked the flower edges then masked the interior to retain all the detail. Done!


If you want to see what the image looks like matted in a frame, increase the canvas size, fill it with white, draw a keyline and add your signature! 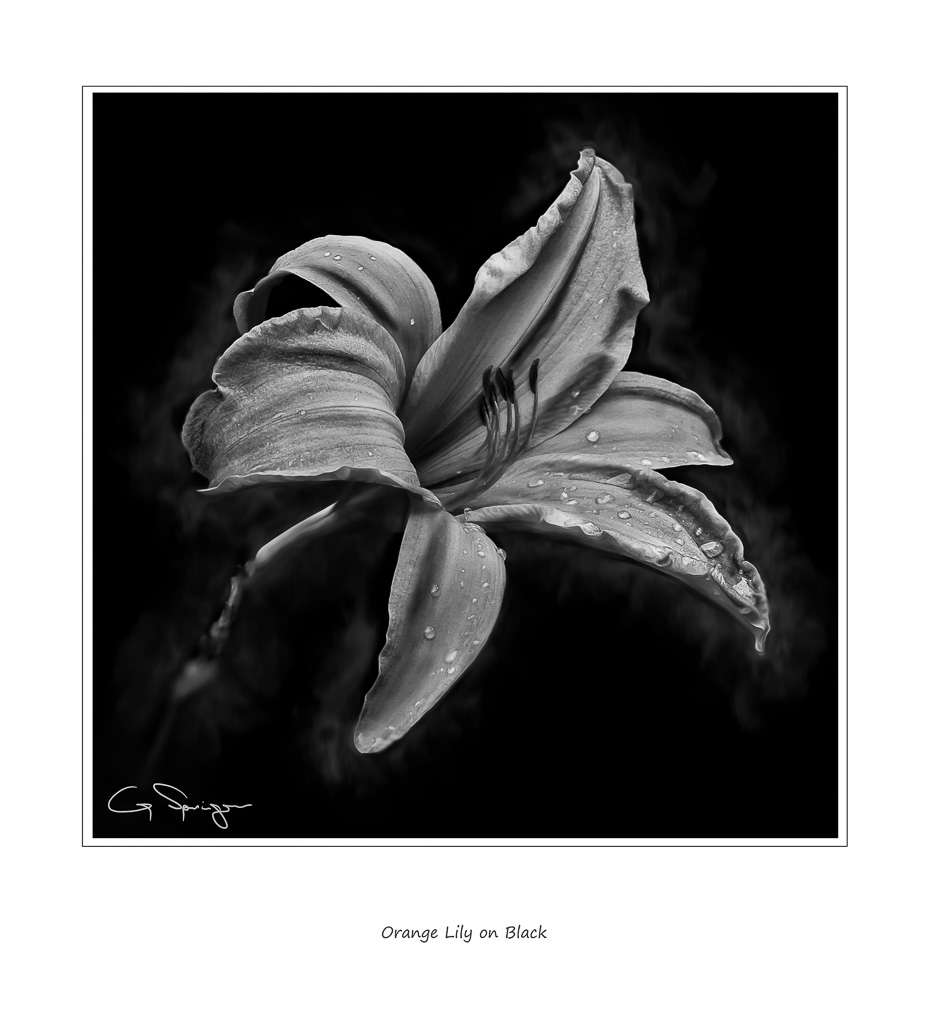 The key here is to select a subject with great tonality and texture, but not too much complexity. Visualize it in black and white. Put it on a pure black background, then enhance it with the traditional darkroom tools now translated into Photoshop. Pay attention to detail and your results will be outstanding.